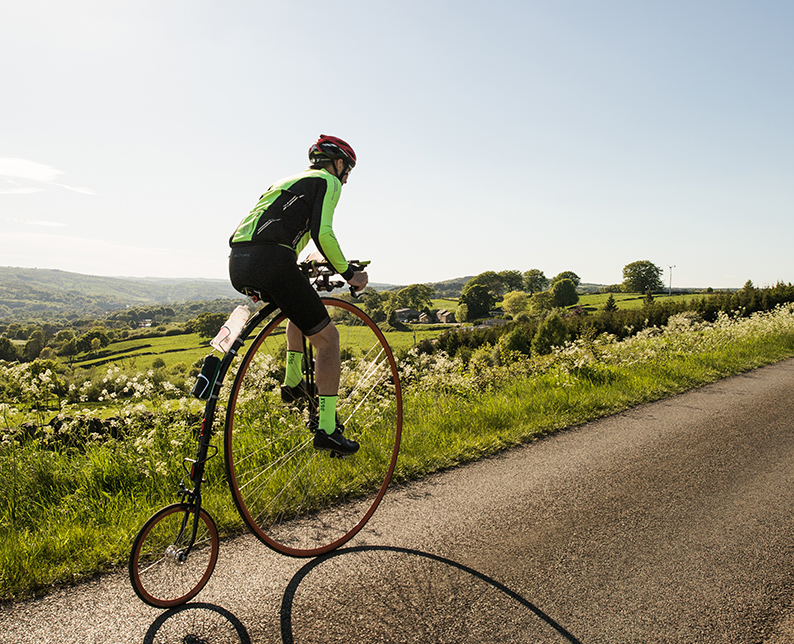 This July, Long Rake Spar are proud to be supporting Richard Thoday as he attempts to break the Guinness World Record for the shortest time between Lands’ End to John O’Groats on a Penny Farthing. Along the way Richard will be raising money for Children In Need.

The record was originally set by G P Mills in 1886, when the 19 year old rode across the country on pre-tarmac roads, riding a 53 inch iron-rimmed, solid-tyred Humber Penny Farthing. Whilst the roads that Richard is travelling along will be a lot smoother than the rutted tracks and cobble sets that Mills faced in 1886, he’s still got a huge challenge ahead.

Richard will have to avoid motorways; battle against holiday and commuter traffic whilst riding alongside high speed vehicles to beat the record of 5 days, one hour and 45 minutes. He’ll be backed by a passionate support crew who will be driving the route to supply motorhome accommodation, spare parts, food and medical supplies.

The route that Richard is riding from Lands’ End to John o’Groats is 840 miles long. Each day he’ll be tackling over 170 miles and the attempt will be tracked so supporters and sponsors will be able to see Richard’s progress throughout the ride.

The team at 4 Season Collective, who are the media partners for Richard’s record attempt, will also be posting updates along the route as well as creating a documentary of the highs and lows of the journey including the endurance training that Richard’s completed.

As an experienced long distance cyclist, who has ridden in 24hr road cycling events, Richard will face long stints in the saddle and his training has taken him far and wide already. He is regularly seen cycling the Penny Farthing around the countryside that surrounds the Long Rake Spar works.

Long Rake’s Managing Director, Trevor Broadhurst, said: “We’re delighted to be supporting Richard in his attempt. It’s important for us to be able to help our community so when we heard that a local teacher was attempting such a heroic journey we definitely wanted to be involved. There are some very keen cyclists amongst our team and many of our colleagues have children who know Richard from his work as a teacher at Highfields Secondary School.”

Long Rake Spar was founded in 1867, just 20 years before the original record was set and the last 150 years have seen a lot of change in the local area but the community remains at the heart of the business.

Along the 840 mile route Richard will be raising funds for Children in Need and is supported by a collection of sponsors, family & friends and the local community, who are all behind him! You can find a link to Richard’s fundraising page here.